The Vietnam War, also known as the Second Indochina War, and within Vietnam as the
“American War,” occurred from 1959 to April 30, 1975. The term Vietnam Conflict is often used to refer to events that took place between 1959 and April 30, 1975. The war was fought between the Communist-supported Democratic Republic of Vietnam (North) and the United States supported Republic of Vietnam (South). It concluded with the defeat and failure of the United States foreign policy in Vietnam. On April 30, 1975, the capital of South Vietnam, Saigon fell to the communist forces of North Vietnam, effectively ending the Vietnam War. Over 8.7 million U.S. forces participated in the Vietnam War.

COLORADO VETERANS OF THE VIETNAM WAR 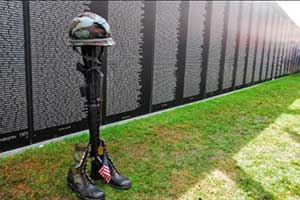 The Japanese American Resource Center wishes to thank those who served in our armed military forces. In order to honor and recognize the Colorado veterans of the Vietnam War, a list with names, and branch of service will be constructed on this page. The community is asked to submit the names of family members and friends who served in this war using the form below or by submitting the names to info@jarcc-denver.org.