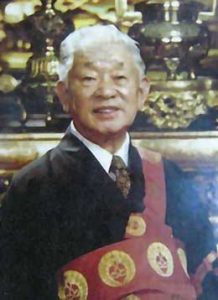 Rev. Tessho Ono is credited with establishing formal Buddhism in Colorado in 1916. He was successful enough to rent The People’s Tabernacle for the first Temple, and then buy property in Denver (the House of Mirrors) to establish a permanent Buddhist Temple.

In 1929, Rev. Yoshinao Ouchi succeeded Rev. Ono. Then in 1930, Rev. Yoshitaka Tamai arrived in Denver assigned to be Rev. Ouchi’s assistant minister. He is faced with adjusting to a new country, a new language, and unfamiliar responsibilities as he does not have experience being a reverend. To add to this inexperience, his only employment was 4 years in the editorial department of Kodanska Magazine Company in Tokyo.

Adding to this quick change of ministers, in 1932, Rev. Ouchi asked for re-assignment making Rev. Tamai the head priest. His legacy began as he made financial decisions to get the Temple on a more positive footing.  He established a dormitory on the upper floors of the “Temple” for rural students to gain access to schooling. During the day, they attended Manual High School, studied Japanese and Buddhist scriptures, and used kendo drills for physical training.

In 1944, Denver’s population saw large increases as incarcerees were released from Amache and other concentration camps. This new influx led to the hiring of a bi-lingual minister, Rev. Tsunoda, to meet the spiritual needs of both English-speaking members as well as those who were only Japanese speaking.

By 1947, the membership had grown and with the support of a successful Sangha, were able to build a more fitting Temple. The Tri-State Buddhist Temple was built on Lawrence Street between 19th and 20th Streets. An auditorium was added in 1959 for community events designating the Hondo solely for religious services. Two years later, a fire tragically destroyed the Hondo and smoke damage was extensive. Amid reconstruction plans, the Sakura Square urban renewal project followed with commercial space and an apartment complex for the elderly, named Tamai Towers.

By the time Rev. Tamai ended his service in 1964, he was instrumental in the physical growth of the of the Japanese and Japanese American community along with its values.

Japan has a Consular Connection to Colorado and Rev. Tamai was decorated with the Order of the Sacred Treasure, Fourth Grade in 1974 by the Emperor. 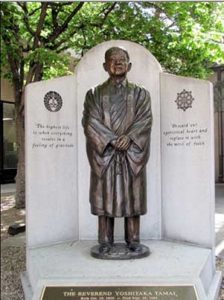 In recognition of his service, a bronze statue of the Reverend Yoshitaka Tamai is found in Denver’s Sakura Square. There is a bronze plaque at the base that reads:

A native of Toyama-ken, Japan, the Rev. Tamai came to Denver in June of 1930. He devoted the rest of his life-53 years-to the spiritual, cultural and social needs of Buddhists in Colorado, Wyoming, Nebraska, Montana, Kansas, Oklahoma, Texas and New Mexico. He taught by example those admirable qualities embodied in the Buddhist faith. His kindness and compassion touched thousands, creating a rich and lasting heritage. Tamai Tower was erected in 1972 as a living memorial to this gentle priest recognized as one of Jodo Shinshu’s most eminent ministers. This statue is dedicated to his memory by a community which loved and respected the priest often called the “Living Buddha.”
Dedicated October 5, 1996

Colorado’s Japanese Americans from 1886 to the Present by Bill Hosokawa, University Press of Colorado, 2005

Tri-State/Denver Buddhist Temple Oneness in the Nembutsu 1916 – 2016 by the 100th Anniversary Committee and Members of the TSDBT Sangha, Tri-State Buddhist Temple, 2016.