THIS IS SOMETHING SPECIAL! 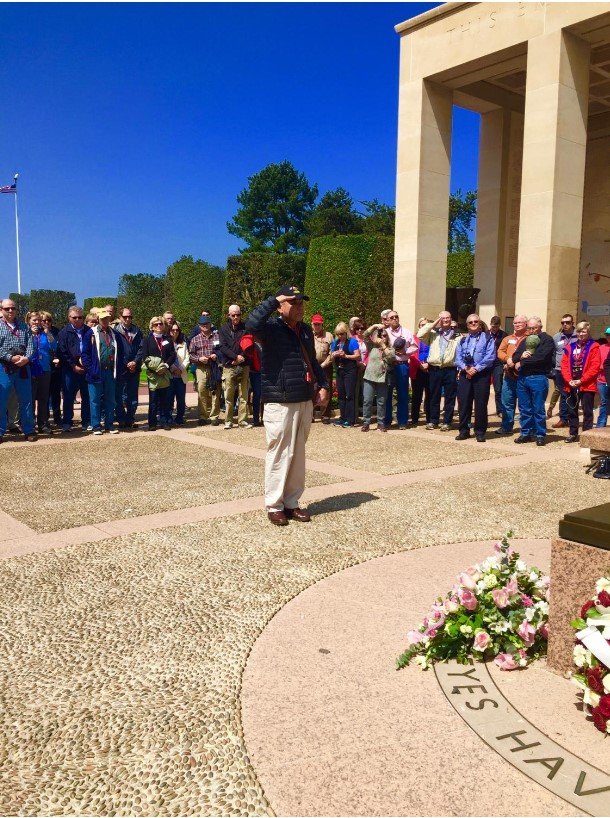 “The real voyage of discovery consists not in seeking new landscapes, but in having new eyes.”
~Marcel Proust

Traveling is one of my favorite pastimes. It has expanded my view of history, cultures and people from different backgrounds. I am thankful my career allows me to travel all over the world. Throughout the years, I had asked my Father multiple times if he wanted to join me. I would mention a destination like Prague, Czech Republic, and he would say, “why would anyone want to go there?” My father had the chance to travel all over Europe during his time in the Army, so he had seen many parts. He is a Vietnam Veteran in the United States Army and was stationed at the United States Army Security Agency Field Station Europe located in Rothwesten, Germany.

Then in 2017, Normandy, France came up on my list of trips. When I asked him, he immediately agreed to accompany me. My father is a history nerd, more specifically a military history nerd. We both wanted to see the historic landmarks and battlegrounds of WWII, mainly the beaches of Normandy. Omaha Beach, where D-Day took place, and where the Normandy American Cemetery and Memorial are located was one of our first stops. Our tour guide was a local from Normandy. She saw that my father had a Vietnam Veterans hat on and asked him about his service. She explained to us how grateful the people from Normandy were for the US soldiers, including Japanese-Americans, and the role they played in liberating cities all over France. She asked him if he would be interested in leading the wreath laying ceremony at the Normandy American Cemetery and Memorial. I was grateful that she chose my father to take part in a tribute to the soldiers of WWII.

The next day we arrived at the Normandy American Cemetery. I was overwhelmed by the number of crosses that represented the American Soldiers that were laid to rest. We approached the memorial which was a semicircular structure with the words engraved, “THIS EMBATTLED SHORE, PORTAL OF FREEDOM, IS FOREVER HALLOWED BY THE IDEALS, THE VALOR AND THE SACRIFICES OF OUR FELLOW COUNTRYMEN.” We all gathered around the statue called The Spirit of American Youth Rising from the Waves, as my father approached the center. He read a memorial to the fallen soldiers, that their sacrifices would not be forgotten. The tour guide handed him the wreath and he placed it at the base of the statue. He took two steps back and saluted.

It was a day filled with emotion, gratitude, and reflection, for those who gave everything so that we could be free. The local tour guide emphasized how grateful the people of France were to the US soldiers who liberated them. She mentioned the Japanese American soldiers, talking about the 442nd and how they were overlooked during a time of racism and prejudice, yet they were the most decorated unit in military history. She chose my father because he is a Veteran of the US Army, but perhaps she also chose him because he was a Japanese American who fought in the US Army. Whatever the reason, it made me understand the appreciation that the people of Normandy and the people of France have for all the soldiers who helped to liberate their town and their country. When I stood on the sands of Omaha Beach, I could see how far the soldiers had to run along the beach while the Germans had a clear view of them from their bunkers. When I saw the cemetery with over 9,000 headstones, it put into perspective how many soldiers gave their lives, not only for their country, but other countries like France.

The cemetery was the location of the final scene in Saving Private Ryan. In the scene, World War II veteran Private James Francis Ryan, accompanied by his family, makes his way to the grave of Captain John Miller (played by Tom Hanks). Then, Ryan salutes the grave and asks his wife if he lived a good life and was a good man. Thank you, to all the men and women, like my father, who heroically served our country. Dad, you lived a good life and you are a good man.