After failing to strengthen their cause in the free elections held in South Korea during May 1950 and the refusal of South Korea to hold new elections per North Korean demands, the communist North Korean Army moved south to attempt to reunite the Korean peninsula, which had been formally divided since 1948. The North Korean invasion came as an alarming surprise to American officials. As far as they were concerned, this was not simply a border dispute between two unstable dictatorships on the other side of the globe. Instead, many feared it was the first step in a communist campaign to take over the world.

The conflict was expanded by the United States and the Soviet Union’s involvement as part of the larger Cold War. The main hostilities were during the period from June 25, 1950 until the armistice was signed on July 27, 1953.

COLORADO VETERANS OF THE KOREAN WAR 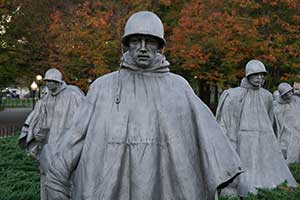 The Japanese American Resource Center wishes to thank those who served in our armed military forces. In order to honor and recognize the Colorado veterans of the Korean War, a list with names, and branch of service will be constructed on this page. The community is asked to submit the names of family members and friends who served in this war using the form below or submit the names to info@jarcc-denver.org.