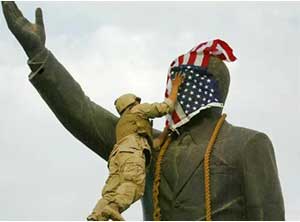 Strong international opposition to the Saddam Hussein regime began after Iraq’s invasion of Kuwait in 1990. The international community condemned the invasion, and in 1991 a military coalition led by the United States launched the Gulf War to expel Iraq from Kuwait. Following the
Gulf War, the US and its allies tried to keep Saddam Hussein in check with a policy of containment.
In October 2002, Congress granted President Bush the power to decide whether to launch any
military attack against Iraq. The Iraq War began on 20 March 2003, when the U.S., joined by the
U.K. and several coalition allies, launched a “shock and awe” bombing campaign. Iraqi forces
were quickly overwhelmed as coalition forces swept through the country.
The Bush administration based its rationale for the Iraq War principally on the assertion that Iraq possessed an active weapons of mass destruction (WMD) program, and that the Iraqi government posed a threat to the United States and its coalition allies. No stockpiles of WMDs or an active WMD program were ever found in Iraq.

Currently there are still 2,500 U.S. service members in Iraq.

The Japanese American Resource Center wishes to thank those who served in our armed military forces. In order to honor and recognize the Colorado veterans of the Iraq War, a list with names, and branch of service will be constructed on this page. The community is asked to submit the names of family members and friends who served in this war using the form below or by submitting the names to info@jarcc-denver.org.