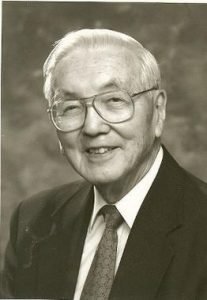 JARCC recognizes Bill Hosokawa for his many contributions to the Denver community and to acknowledge his accomplishments as a prolific author documenting the experiences of Japanese Americans during WW II by listing his titles.

Bill Hosokawa began his newspaper career while incarcerated at Heart Mountain in Wyoming.
He began working for the Des Moines Register as a copy editor following his release from Heart Mountain in 1943 due to family circumstances.

In 1946, he and his family moved to Denver when the Denver Post hired him. He served in many positions including editor of the Sunday Empire, war correspondent, and Managing Editor.

In 1984, he left the Denver Post and began working for the competitive newspaper, the Rocky Mountain News where he remained until his retirement in 1992.

Among his many endeavors, he wrote columns for the Pacific Citizen, a Japanese American Citizens League (JACL) newspaper and the Rocky Mountain Jiho, the newspaper with news specific to the Japanese community.

His diplomatic contributions were highlighted when he was named Honorary Consul General of Japan for Colorado. In this position, he built business and cultural relationships with Japan.

He was decorated the Rising Sun, Third Grade, Gold Rays with Neck Ribbon by the Emperor of Japan in 1987. Among many awards, the Asian American Journalists Association honored him with a lifetime achievement award in 2003, and in 2007, he received the Civil Rights Award from the Anti-Defamation League.

The Denver Public Library and the Bill Hosokawa Bonsai Pavilion at the Denver Botanic Gardens have identical memorials to him, dedicated in 2012 shortly before he passed away.