* ”When the United States entered World War II in 1941, there were 5,000 Japanese Americans in the U.S. armed forces. Many were summarily discharged. Those of draft age were classified as 4-C, “enemy aliens,” despite being US citizens.
In Hawaii, however, a battalion of Nisei volunteers was formed in May 1942. As the 100th Infantry Battalion, they were sent to North Africa in June of 1943 where they joined the 34th Division in combat. By September 1943, they were sent to Italy where they saw fierce combat and came to be known as the “Purple Heart Battalion” due to their high casualty rate.Courtesy of the Seattle Nisei Veterans Committee and the U.S. Army.

In January 1943, the US War Department announced the formation of the segregated 442nd Regimental Combat Team (RCT) made up of Nisei volunteers from Hawaii and the mainland. In June of 1944, the 442nd joined forces with the 100th Infantry Battalion in Europe and incorporated the 100th into the 442nd. Due to the stunning success of Nisei in combat, the draft was re-instated in January 1944 for Nisei in the detention camps to bolster the ranks of the 442nd. Eventually, the 442nd RCT consisted of the 2nd, 3rd, and 100th Battalions; the 522nd Field Artillery Battalion; the 232nd Engineering Company; the 206th Army Band; Anti-Tank Company; Cannon Company; and Service Company.

Due to their outstanding bravery and the heavy combat duty they faced, the 100/442nd RCT became the most decorated unit in U.S. military history for its size and length of service. There were over 18,000 individual decorations for bravery, 9,500 Purple Hearts, and seven Presidential Distinguished Unit Citations.
*https://www.njahs.org/100th-442nd-regimental-combat-team/

Perhaps, one of the most famous members of the 100th Battalion, was Senator Daniel Inouye of Hawaii. He was the second longest serving member of the U.S. Senate prior to his death. He served as President Pro Tempore from 2010-2012, third in line of presidential succession. He was the highest ranking public official of Asian descent in U.S. history.
https://dkii.org/the-man/ 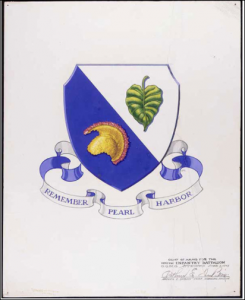 The logo and motto “Remember Pearl Harbor” of the 100th Infantry Battalion
Courtesy of the US National Archives.